Home »Featured»Kuji’s Bookshelf: My Lethal Weapon is My Mind 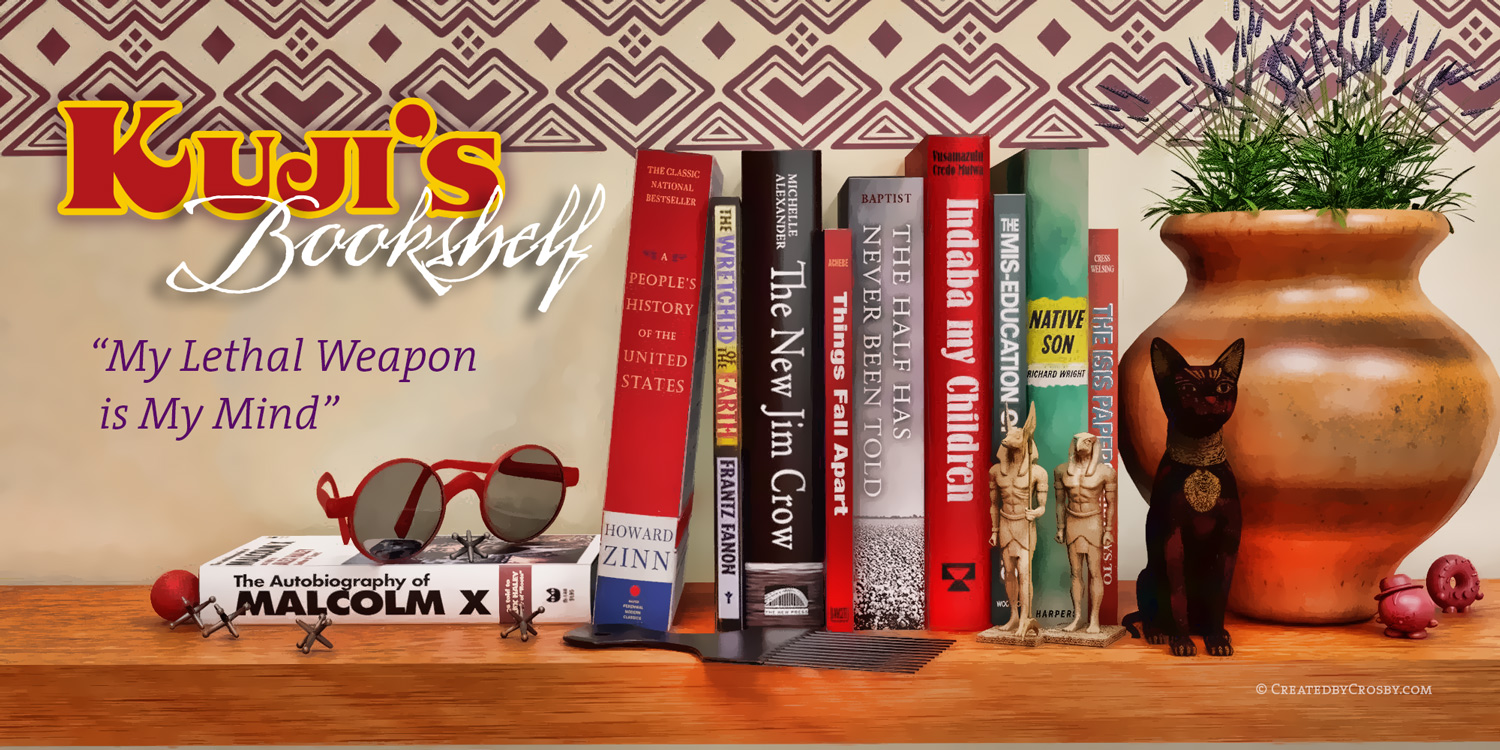 My lethal weapon is my mind

Kuji always rolls in with her mental guns blazing. When she arrives on campus next year she’ll be well prepared. She’ll go there to learn, not to be bamboozled by ignorance or muddled thinking. Pity the fool who tries to prop up their reactionary opinions against Kuji’s well-researched facts. You can pat her down but never disarm her, “My lethal weapon is my mind,” says Kuji, “and I’m only just getting started.”

A People’s History of the United States: 1492-Present by Howard Zinn
“Known for its lively, clear prose as well as its scholarly research, A People’s History of the United States is the only volume to tell America’s story from the point of view of—and in the words of—America’s women, factory workers, African-Americans, Native Americans, the working poor, and immigrant laborers. As historian Howard Zinn shows, many of our country’s greatest battles—the fights for a fair wage, an eight-hour workday, child-labor laws, health and safety standards, universal suffrage, women’s rights, racial equality—were carried out at the grassroots level, against bloody resistance.”

Things Fall Apart by Chinua Achebe
“Things Fall Apart, Chinua Achebe’s masterpiece, has been published in fifty different languages and has sold millions of copies in the United States since its original publication in 1958-1959. Achebe’s first novel portrays the collision of African and European cultures in people’s lives. Okonkwo, a great man in Igbo traditional society, cannot adapt to the profound changes brought about by British colonial rule. Yet, as in classic tragedy, Okonkwo’s downfall results from his own character as well as from external forces.”

The Miseducation of the Negro by Carter G. Woodson
“‘The oppressor has always indoctrinated the weak with his interpretation of the crimes of the strong.’
Considered Woodson’s seminal work, this text explores his thesis that African Americans were being culturally indoctrinated, rather than taught, in American schools. He asserts that this conditioning caused African-Americans to become dependent and to seek out inferior places in the greater society of which they were a part. Woodson skillfully exposes the weaknesses of Euro-centric based curriculums that failed to include African American history and culture.”

The Autobiography of Malcolm X as told to Alex Haley
“The Autobiography of Malcolm X defines American culture and the African American struggle for social and economic equality that has now become a battle for survival. Malcolm’s fascinating perspective on the lies and limitations of the American Dream, and the inherent racism in a society that denies its nonwhite citizens the opportunity to dream, gives extraordinary insight into the most urgent issues of our own time.

The Autobiography of Malcolm X stands as the definitive statement of a movement and a man whose work was never completed but whose message is timeless. It is essential reading for anyone who wants to understand America.”

Indaba My Children: African Tribal History, Legends, Customs, and Religious Beliefs by Vusamazulu Credo Mutwa
“As a young man, Vusamazulu Credo Mutwa, a Zulu from the South African province of Natal, was determined to follow in the footsteps of his grandfather and become a tribal historian in order to keep the rich oral tradition of his culture alive. In this book, begun in response to the injustices against Africans and their culture, he sets these legends down in writing. He begins with the creation myth, when Ninavanhu-Ma, the Great Mother, created the human race. From there, an epic unfolds, an intricate and vivid cultural tapestry populated by gods and mortals, cattle herders and supreme kings, witch doctors, lovers, grave diggers, warriors, and handmaidens.”

The New Jim Crow: Mass Incarceration in the Age of Colorblindness by Michelle Alexander
“It is no longer socially permissible to use race, explicitly, as a justification for discrimination, exclusion, and social contempt. Yet, as legal star Alexander reveals, today it is perfectly legal to discriminate against convicted criminals in nearly all the ways that it was once legal to discriminate against African Americans. With dazzling candor, legal scholar Michelle Alexander argues that “we have not ended racial caste in America; we have merely redesigned it.” By targeting black men through the War on Drugs and decimating communities of color, the U.S. criminal justice system functions as a contemporary system of racial control—relegating millions to a permanent second-class status—even as it formally adheres to the principle of colorblindness.”

The Half Has Never Been Told: Slavery and the Making of American Capitalism by Edward E. Baptist
“As historian Edward Baptist reveals in The Half Has Never Been Told, the expansion of slavery in the first eight decades after American independence drove the evolution and modernization of the United States. In the span of a single lifetime, the South grew from a narrow coastal strip of worn-out tobacco plantations to a continental cotton empire, and the United States grew into a modern, industrial, and capitalist economy. Until the Civil War, Baptist explains, the most important American economic innovations were ways to make slavery ever more profitable. Through forced migration and torture, slave owners extracted continual increases in efficiency from enslaved African Americans. Thus the United States seized control of the world market for cotton, the key raw material of the Industrial Revolution, and became a wealthy nation with global influence.”

Native Son by Richard Wright
“Right from the start, Bigger Thomas had been headed for jail. It could have been for assault or petty larceny; by chance, it was for murder and rape. Native Son tells the story of this young black man caught in a downward spiral after he kills a young white woman in a brief moment of panic. Set in Chicago in the 1930s, Wright’s powerful novel is an unsparing reflection on the poverty and feelings of hopelessness experienced by people in inner cities across the country and of what it means to be black in America.”

The Wretched of the Earth by Frantz Fanon
“The Wretched of the Earth is a brilliant analysis of the psychology of the colonized and their path to liberation. Bearing singular insight into the rage and frustration of colonized peoples, and the role of violence in effecting historical change, the book incisively attacks the twin perils of post independence colonial politics: the disenfranchisement of the masses by the elites on the one hand, and intertribal and interfaith animosities on the other. Fanon’s analysis, a veritable handbook of social reorganization for leaders of emerging nations, has been reflected all too clearly in the corruption and violence that has plagued present-day Africa. The Wretched of the Earth has had a major impact on civil rights, anti-colonialism, and black consciousness movements around the world, and this bold new translation by Richard Philcox reaffirms it as a landmark.”

All right, This piece took long enough. It required that I reproduce the spine of each book for 3D rendering. For the most part, nice, clean versions of the covers were available online, but never the spines. I preferred to use the earliest printings of each book. Many I’d read or seen many years ago so those covers appealed to me. I want to thank those who commented on Facebook and Instagram regarding essential books to read. There are way more than can be listed here.

One Reply to “Kuji’s Bookshelf: My Lethal Weapon is My Mind”