Speaking of summer vacation, I thought I’d update you with a few of the things I worked on over the past few months. If you’ve been browsing my site for a while you should know that I do my illustrations primarily using a 3D program called Poser and polish them off with Photoshop. Recently I’ve been using another program called Blender to create various props and textures to import into Poser. The more I use Blender, the more I like it. With the introduction of a plugin called Manuel Bastioni Lab (MBL), a 3D figure creator, I’m beginning to explore the possibility of making Blender my main tool going forward. There may be some 3D geek speak ahead so brace yourself.

Creating realistic and posable (rigged) figures in 3D is one of the more difficult challenges in the art. Poser’s strength has been in its ability to allow users to easily modify, clothe, and pose 3D figures. Using the Manuel Bastioni Lab plugin, creating figures in Blender is a snap. Posing and clothing these figures… not so much, but I’ll be slowly learning the ropes. I plan to do an in-depth report on Blender and MBL in the future. Below are some of my experiments so far.

Figures created in Manuel Bastioni Lab appear within the program without clothing. The default skin texture conveniently blacks out the “objectionable” parts though.

The ability to shape a figure in terms of size, weight and muscle mass is one of MBL’s outstanding features. Here I’m experimenting with painting clothing directly on the figure. Hair would be nice as well. I call her Bantu Lady after the hairstyle I worked on for her. Another work in progress. 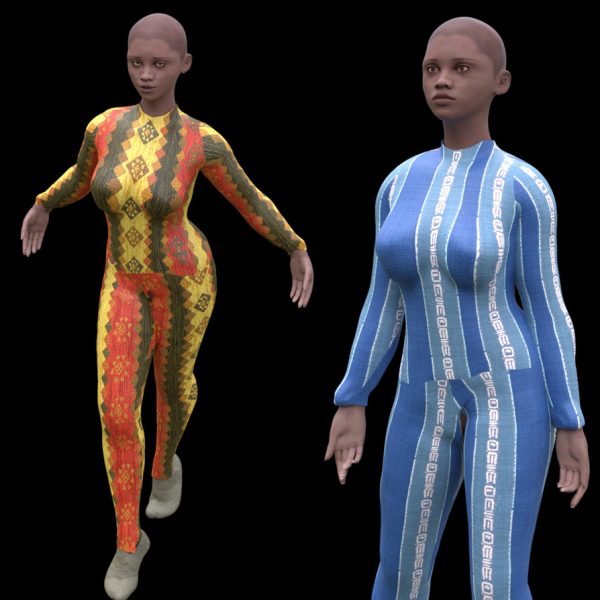 This young lady models what’s known as a quicksuit. It’s a 3D mesh that covers the body like clothing. Manuel Bastioni Lab includes a system to “conform” the clothing to the body where it follows the figure’s movements. Here I modified an existing suit to fit and applied a couple of textures. From here I can essentially tailor the mesh to create other garments. 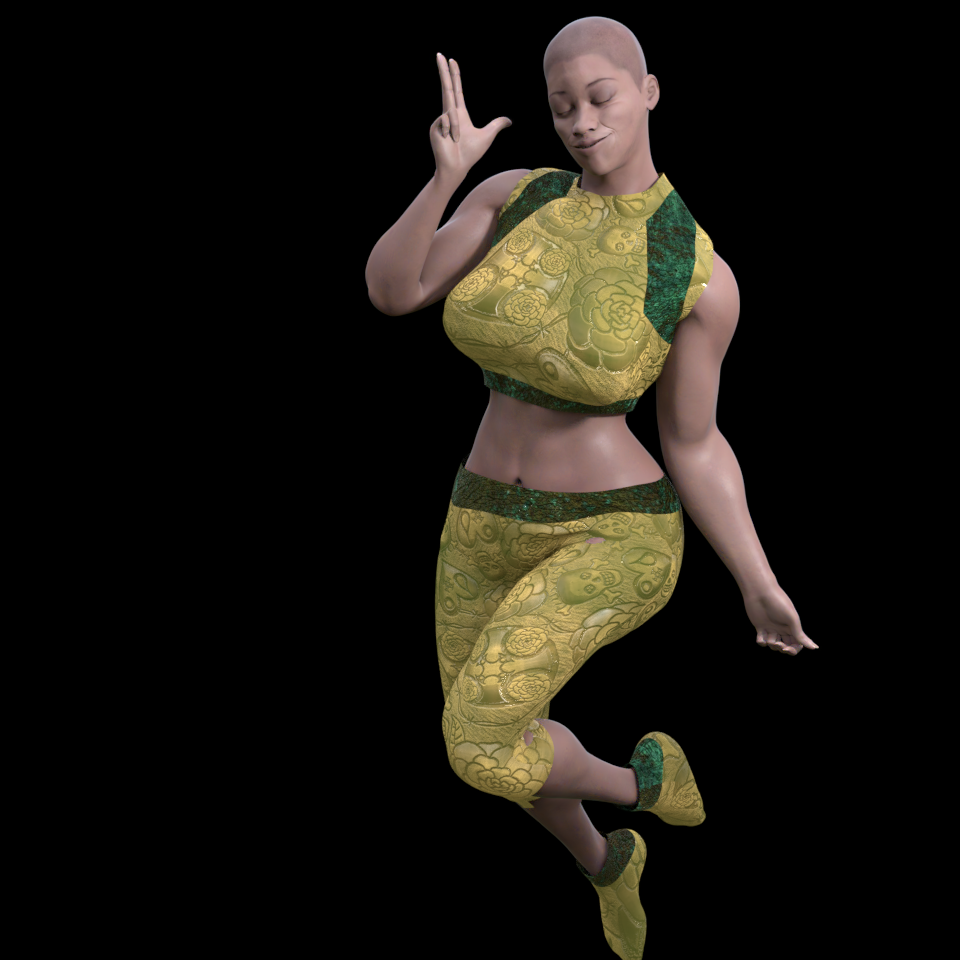 Just having fun with texturing and posing. This full figured lady is meant to explore the limits of the quicksuit as far as stretching the mesh and applied textures. Parts of the suit have been made transparent to give the appearance of three parts. Unlike in Poser, I can easily create material zones to apply different textures to selected faces of the mesh. 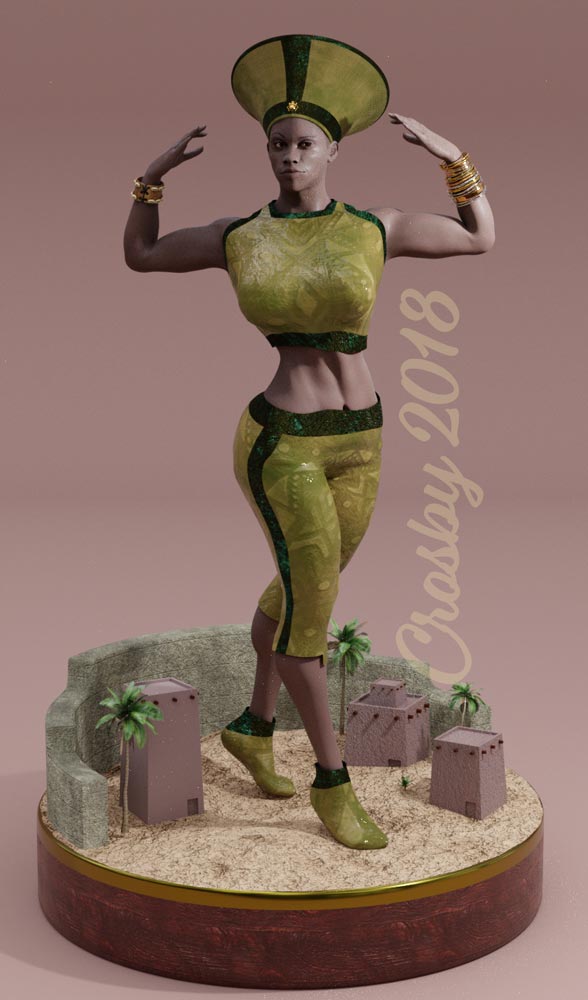 These last two add some different lighting and my mud/brick desert dwellings. It’s kind of a diorama that might deserve more attention in its own scene. 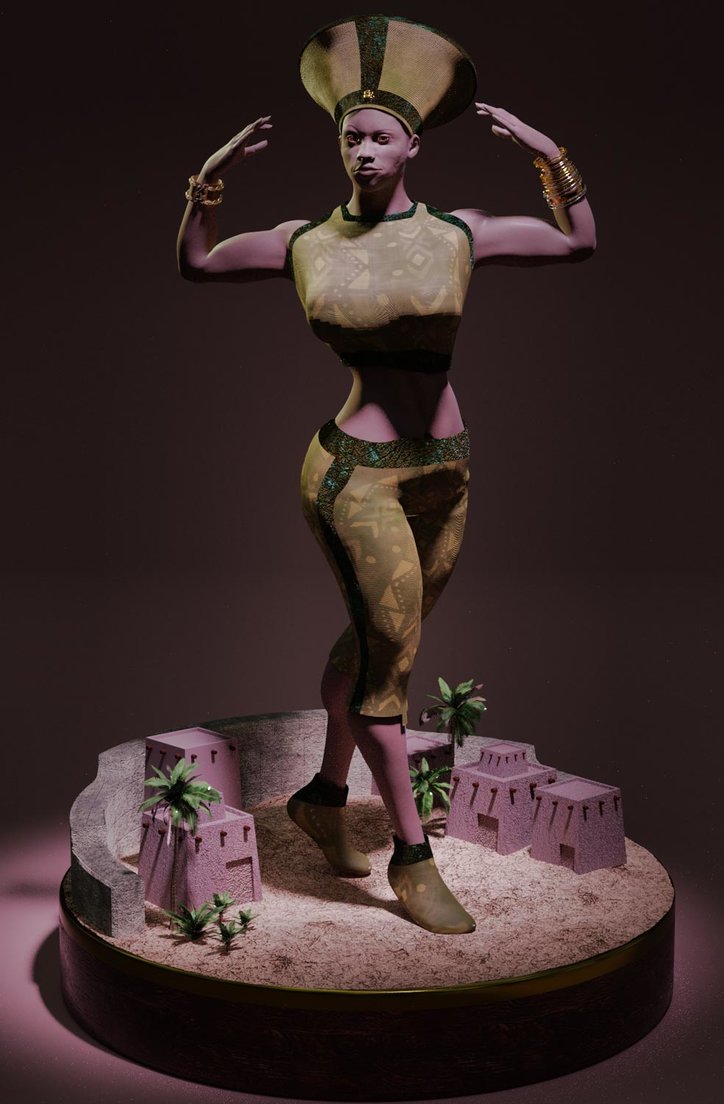 Alright! I hope this post wasn’t too long and software focused. I tend to do a lot of experimentation. In traditional art these might be considered “sketches”, or more accurately “studies”. Is this kind of information of interest or should I go back to finished Kinara’s Children images? Any comments are welcome.